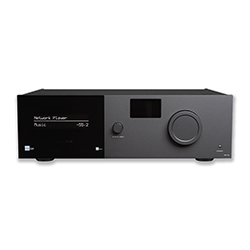 The MP-40 by Lyngdorf Audio is a superb sounding and richly featured surround sound processor - we have it on demo in our cinema room, so do visit us and check it out.

8300CD from Audiolab is both an exceptional CD Player and a top-class external DAC/Digital Preamp.

Demonstrating a level of fine detail, transparency, soundstage depth, dynamic range and musical flow across all sources, 8300CD is able to make the most of any CD collection, plus deliver an enormous sonic boost to external digital audio sources with resolution to 32-bit/384kHz and DSD compatibility via USB.

This product is now discontinued.

Audiolab have worked long and hard to ensure that their 8300CD improves upon its illustrious predecessor in key areas, delivering even better performance as both a CD player and a DAC/preamp for external digital sources.

Built around the peerless ESS Sabre DAC, the 8300CD now extends resolution to 32-bit/384kHz and adds DSD compatibility via USB.

While their engineers have referenced the blueprint of the previous 8200 series, each of these new components have come under scrutiny to create a hi-fi system well ahead of what is already a leader in its field. With more efficient components, high-definition audio format technology and redefined aesthetics, the 8300 Series has raised the bar yet again.