The 705 Signature is Bowers & Wilkins most compact Tweeter-on-Top stand-mounted model, which has now received their Signature treatment.

Based on the superb 705 S2, it features the Continuum cone and Carbon Dome, is finished in exclusive Datuk Gloss and features optimised crossovers, making it well-worthy of their Signature nameplate.

Featuring an optimised tweeter housing milled from a solid block of aluminium, the design creates an acoustically optimised housing that is exceptionally inert and resistant to resonances.

Carbon Dome tweeters are purpose-built for the 700 Series and deliver pinpoint imaging accuracy and detailed insight in to your music.

Unilet Sound & Vision are long-standing official retail partners of Bowers & Wilkins, for sales, service and aftercare of their entire product range. Do get in touch with us if you require advice or assistance regarding any of their models. 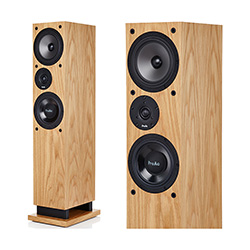 We've still got the wonderful ProAC Response DT8 Loudspeakers set-up for audition. These have amazing multi-genre drivers suitable for ALL forms of music, so come listen this week before we put something new on demo.